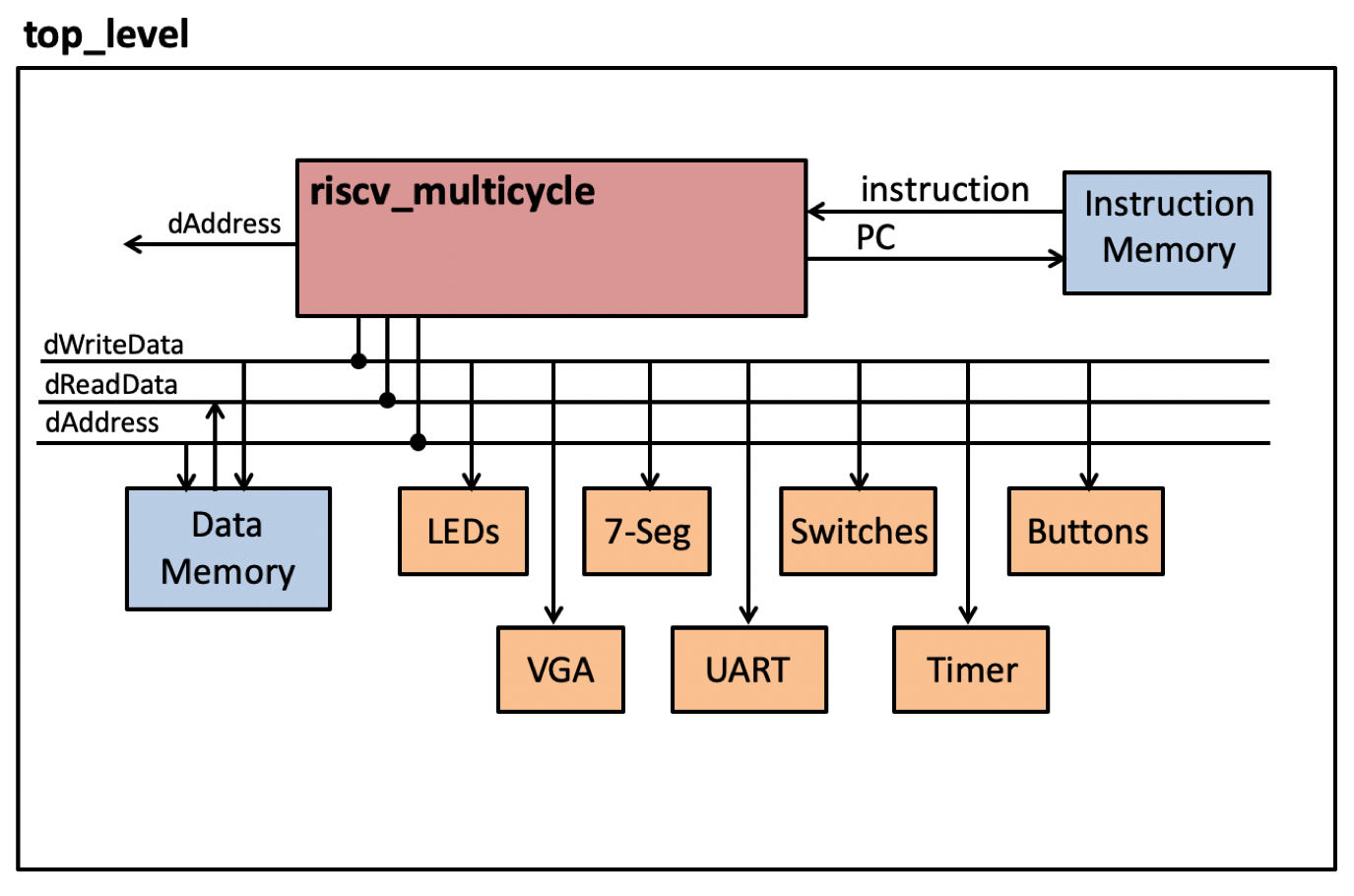 As shown in this figure, the top-level design will include the instruction memory, data memory and a variety of I/O devices. Your RISC-V assembly language programs will be inserted into the instruction memory and the data memory will contain any constants needed by your program and will hold the system stack. In addition to memory, the top-level design includes a variety of I/O devices that your processor can control. These I/O devices include the 16 LEDs, 16 switches, the five buttons, the seven-segment display, the UART, and the VGA display (see note about the need for a VGA Display 1).

The system that has been created for you has several different address regions, each with a specific and important purpose. It is essential that you understand this address space as you will need to create assembly language programs that properly interact with this system. The purpose of these memory regions is summarized below:

The address range and size of each of these memory regions is summarized below:

The I/O devices that have been added to this system can be controlled and monitored by writing data to and reading data from reserved memory locations that are dedicated to I/O devices in the system. This approach for controlling I/O is called “Memory Mapped I/O”. Memory Mapped I/O includes dedicated decoding logic within the that monitors the address and control signals coming out of the RISC-V processor. When this decoding logic observes a write operation (caused by the ‘sw’ instruction) at the specific location of a I/O device, it intercepts this write and sends the data to the appropriate I/O device. The I/O devices act just like a memory in that they accept data from the ‘sw’ instruction and provide data back to the processor from the ‘lw’ instruction.

The function of each of these I/O devices and how they are mapped to this I/O address space will be described below. Several assembly language code examples will be given to demonstrate how to use these I/O devices.

To access the I/O memory, you will need to load a registter with the base address of the I/O memory space (0x0000_7f00).
If we had access to the full RISC-V instruction space, we could simply use a lui instruction followed by a addi immediate to load a register with this address (i.e., the li pseudo instruction). Unfortunately we do not have access to this instruction at this point (we will add it later in the semester) and we will need to initialize a register with this address in a more awkward way. The approach shown below will initialize register x3 by loading 0x7f into “shifting” x3 to the left 8 places. We don’t have a shift instruction yet so we will have to perform a shift by one by adding x3 to itself eight times.

At this point, x3 should have the base address of the I/O address space and you can use this register to access the I/O modules described below. All of the code examples shown below assume that this base address is stored in register x3.

Your RISC-V processor is able to control the 16 LEDs that are provided on the Basys 3 board. You can turn these LEDs on by writing data to address 0x0000_7f00 (0x0000_7f00 + 0). Writing to this memory location using a store word (‘sw’) instruction will set the value of the 16 LEDs. Bit 0 of the word corresponds to LED 0, bit 1 corresponds to LED 1, and so on. Note that since there are 16 LEDs and 32 bits in a word, the upper 16 bits written to this address location will be ignored. The bit value ‘1’ corresponds with turning ‘on’ the corresponding LED.

The following code example demonstrates how to write the value 0xa5 to the LED registers.

This example will turn ON the following LEDs: LED7, LED5, LED2, and LED0. All other LEDs will be turned off.

Note that you can also read from this memory location using the load word (‘lw’) instruction to determine which LEDs are currently turned on (as dictated by a previous ‘sw’ instruction to the LEDs).

The memory mapped address 0x0000_7f04 (0x0000_7f00 + 0x04) corresponds to the slide switches. Reading from this memory location will indicate which switches are in the “on” (up) position. Bit 0 of the resulting word corresponds to the status of SW0 (right-most switch), bit 1 corresponds to SW1, and so on. Since there are only 16 switches, the top 16 bits of this word will always be zero. Writing a value to this memory location will not do anything. The following code example demonstrates how to read the switches:

Indicate what the following assembly language program will do?

The address 0x0000_7f24 (0x0000_7f00 + 0x24) corresponds to the push buttons. Reading from this memory location will indicate butons which are pressed. When a button is pressed, the bit corresponding to the button will have the value ‘1’. The relationship between bit location and button is summarized in the table below:

A simple timer has been added to the system to provide a time stamp to facilitate timing accurate interactions. When the timer is read (0x0000_7f30), it will return the number of milliseconds since the processor was first turned on or since it was last reset. The timer can be loaded with any value by writing to the same address location (this is a convenient way to reset the timer). The following code example demonstrates how to wait for 10 ms:

The I/O sub-system also includes the UART and the VGA controller but these will be described in a future lab.

In this first exercise you will simulate your processor from the previous lab executing within the I/O system described above. A set of Verilog files has been created that implements the I/O functions described above. In addition, a constraints file has been created for you that maps the top-level I/O signals to the pins on the BASYS3 board. You will insert your multi-cycle processor into this system to provide your processor with the memories and I/O you need. Begin the exercise by updating the starter code and merging the updated code in your repository.

Create a new project for this lab by executing the create_multicycle_project.tcl script that is in your ‘lab07’ repository directory (i.e., ‘source’ this file in the Vivado tcl shell: source create_multicycle_project.tcl ). These commands will create a new project and integrate your code with the I/O system code to create a top-level system. You may want to perform the synthesis step on your full processor system to make sure everything is hooked up properly and that there are no major errors.

A simple test I/O program, multicycle_iosystem.s, has been written that operates on the I/O system described above. This program uses the buttons, switches, LEDs, and seven-segment display. Carefully review this program and answer the questions on Learning Suite about its functionality.

Answer the questions about the test program in Learning Suite.

You need to compile this program with the RARS assembler and create a ‘.mem’ memory file for use by the Vivado tools. The following command demonstrates how to assemble this file and generate the memory file for Vivado.

The arguments to this

If your project is created properly and your processor binary files are properly added to the project then you can simulate this program executing on your processor within the top-level I/O system. Open the simulator with your project and execute the template tcl file, iosystem_template.tcl, to start simulation. When simulating this system with the precompiled program, you will receive messagese indicating reads and writes to the I/O ports. The following example demonstrates the output of this simulation.

You can emulate the pressing of buttons and changing th switches by modifying this .tcl script to change these top-level inputs. Create your own tcl file named iosystem.tcl and extend this tcl script to simulate the following conditions:

Note that when you simulate a button press, you need to hold the value of the button for about 10 us so that the debouncer properly registers the button press. Also, provide a delay of at least 1 us between the releasing of a button and the pressing of a new button.

You will need to include this .tcl file file as part of your lab submission

For this exercise, you will synthesize, implement, and download your processor along with the I/O sub-system precompiled with the demonstration program. Before performing synthesis, you need to tell the synthesis tool which instruction memory file to use. The following tcl command demonstrates how to set the instruction binary for the circuit to the memory file you generated in the previous exercise:

Summarize the estimated resources for your implemented design.and the worst negative slack (WNS)

Download the bitstream to the Basys3 board and verify that it operates as you expect.

For this final exercise, you will create your own program that runs on your multi-cycle RISCV processor. Create a new assembly language program named buttoncount.s that performs the following functions:

After you have created your assembly language program, assemble the program into a hex memory dump file named buttoncount_text.mem using the instructions described in Exercise #2. The following command demonstrates how to generate this file along with a ‘debug’ file that contains the assembled debug output buttoncount_s.txt. This file is useful for determining the address of each instruction when you need to debug your program in the simulator.

Create a new simulation set named ‘sim_2’ so you can simulate your new program (the other simulation set,’sim_1’, has the original assembly language program). Having two simulation sets allows you to switch between the two programs in the same project. The following commands demonstrate how to create new simulation set and how to specify the instruction memory used for this set.

A simulation tcl file named buttoncount.tcl has been created for you to stimulate the switches and buttons in your program. Use this stimulus to make sure your program is operating properly.

After you have verified that your program operates correctly, create a new bitfile with this program by changing the synthesis parameter and running the implementation tools:

To create your submission, make sure the following files are committed in your ‘lab07’ directory:

Make sure you do not add unnecessary files (including Vivado project files) to your repository. Tag your repository with the string lab7_submission and push your repository back to the origin. Test your submission by running the lab07_passoff.py pass-off script found in the starter code. Review the instructions for submitting and passing off labs to make sure you have completed the lab properly.

Include the following information at the end of your laboratory report.

How many hours did you work on the lab?

Provide any suggestions for improving this lab in the future.